We will get back to you shortly

Caring enough is the commitment to ‘do things better’ – not just for the business but for the world at large. We undertake multiple initiatives to strengthen communities.

To see a need and to take the initiative to answer it. To see an opportunity and to develop solutions. That's what we do. 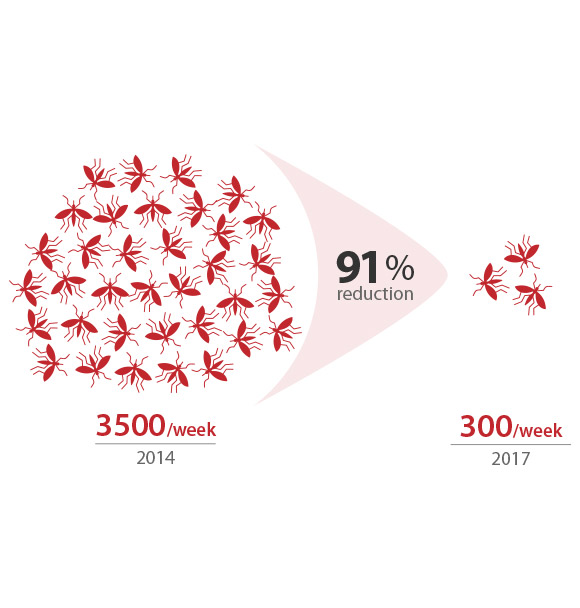 Thanks to Indoor Residual Spraying (IRS) Dokolo District has successfully witnessed an impressive reduction of 3,200 cases per week of malaria after delivery of IRS to Dokolo in 2013.

Malaria Weekly reported cases in Dokolo reduced from an average of 3,500 cases per week in 2014 to less than 300 cases per week at the end of year 2017, according to the 2017 Health Monitoring Information System (HMIS) Report. Today, the total IRS coverage for the entire 11 sub counties including one town council in Dokolo stands at 86 per cent.

The district chairman, Mr Frederick Odongo, said they have been successful in the fight against malaria because everybody was involved. “Before we started implementing IRS, we mobilised and sensitised the community and we set targets of what we expect from the pump operators. Where there is resistance, we normally go there and dialogue with the community and they understand and allow their houses to be sprayed,” Mr Odongo said.

By the end of the programme, Dokolo which had the highest prevalence of malaria in the whole country, expects 90 per cent coverage. The initiative is to protect more than 1,80,000 people at high risk between 2014 and 2022.

“UPL and its subsidiaries have made every attempt to ensure accuracy of the information provided on this website. However, this is a global webpage with access to different geographies for wider reach and greater awareness of UPL. In the course of doing the same, UPL has used Google translator plugin to convert the language of this website from English to select regional languages.